The customer searched for a company that would develop and launch a mobile application from scratch. The client had already had mockups and a design draft of the app. However, provided design was non compliant with platform guidelines and design trends. So, we updated several screens and after that we got approval to update the whole application prototype.
The development process started according a fixed-price model as the customer had clear and detailed requirements and a confirmed prototype. The project was divided in 5 iterations, each having 2 weeks duration. After each iteration we showed progress to customer.
At the first stage backend part (REST API), admin panel and Android application were developed. It took about 2,5 month.
iOS app development started when the stage 1 was approved, and took about 2 months.
At the following step we made a big count of improvements and implement new application features. Some time went to tasks planning and management including features discussion and requirements processing. The third stage took 3 months and as a result we enhanced and expand the product.
Note: At first we considered the option of backend development on Parse as the app was planned to have pretty simple data storage logic. However, during the requirements discussion and processing the business logic was significantly revised and complicated, and Parse capacities wouldn’t be enough. Also in January Parse was fully retired meaning that our decision would be a good one in any case.
After application launch we fixed some bugs (appeared after the release): there were only several ones, which proved quality of the code and maturity of the solution.
At the end we developed a useful and exciting application for couples that enables users to:
– invite a partner to enjoy the app;
– take and use ideas from Idea bank;
– save favorite ideas;
– see partner’s ideas;
– create romantic plans in the calendar;
– send reminders to the partner;
– leave comments;
– create flirty posts and notes;
– send dares.

For 5 months we developed a perfect quality mobile application for the two most popular mobile platforms. The app meets all the customer’s requirements and has quality UI design. As a result of the development we received great and useful experience in design creation especially what concerns UI components.
It was a long way to build relationship with customer: from establishing contact and some doubts to building trust and close cooperation.
Our customer has great marketing and management background which helped a lot during the working process. All the requirement were pretty clear and well managed from a customer side. As the client had no    technical skills, sometimes it was difficult to manage the expectations. As a result we switched to time based model with pretty transparent and convenient process. 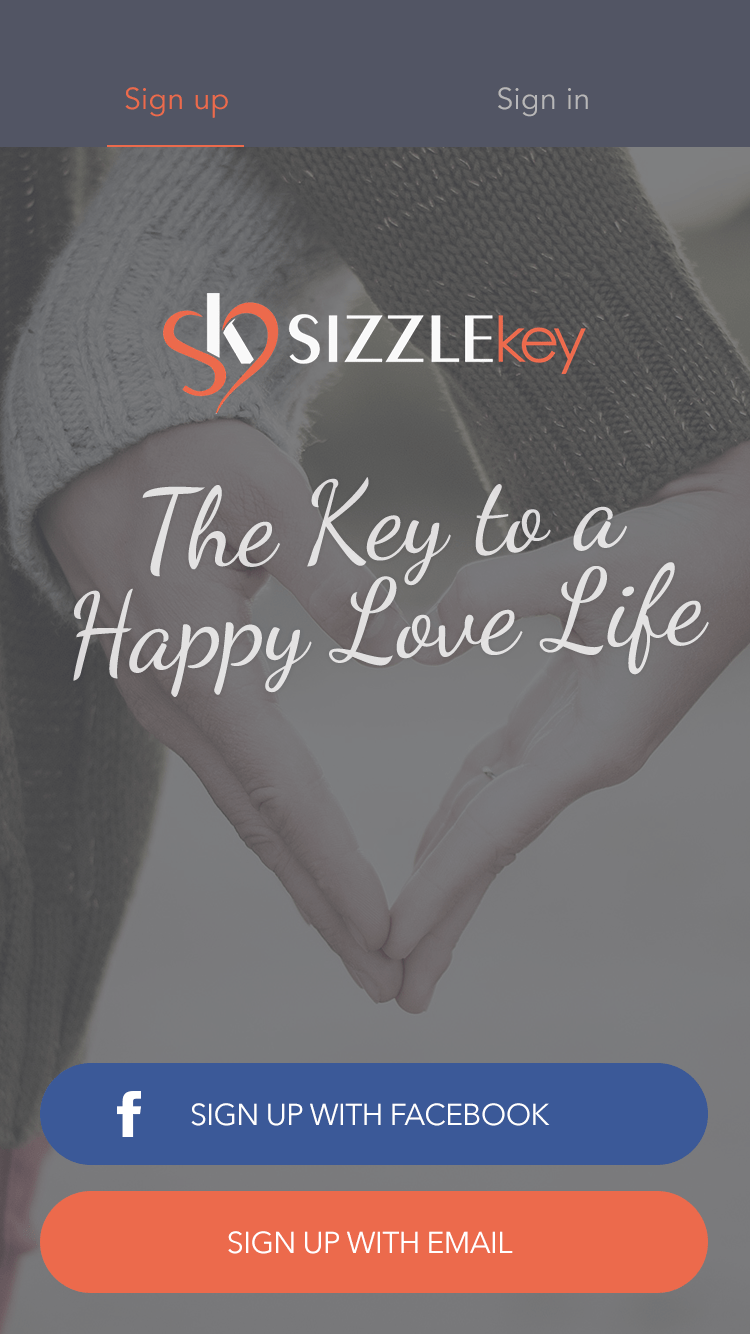 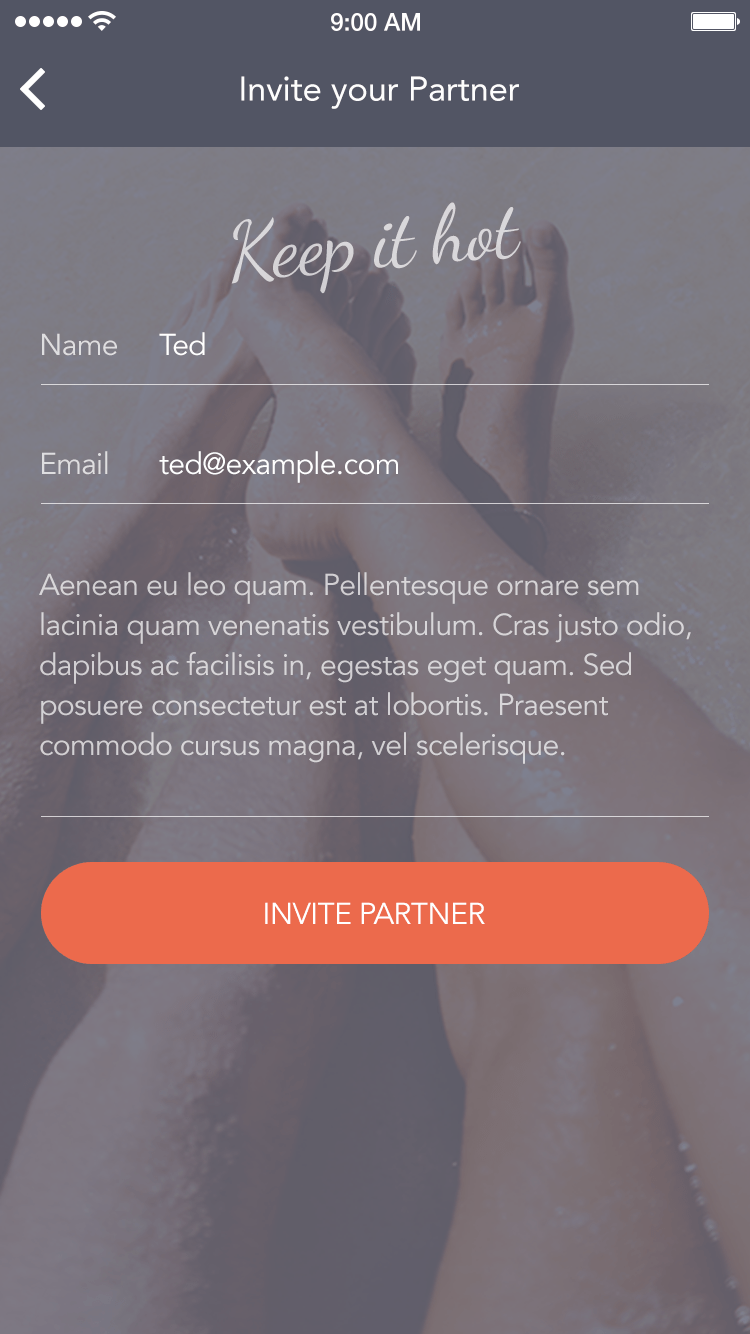 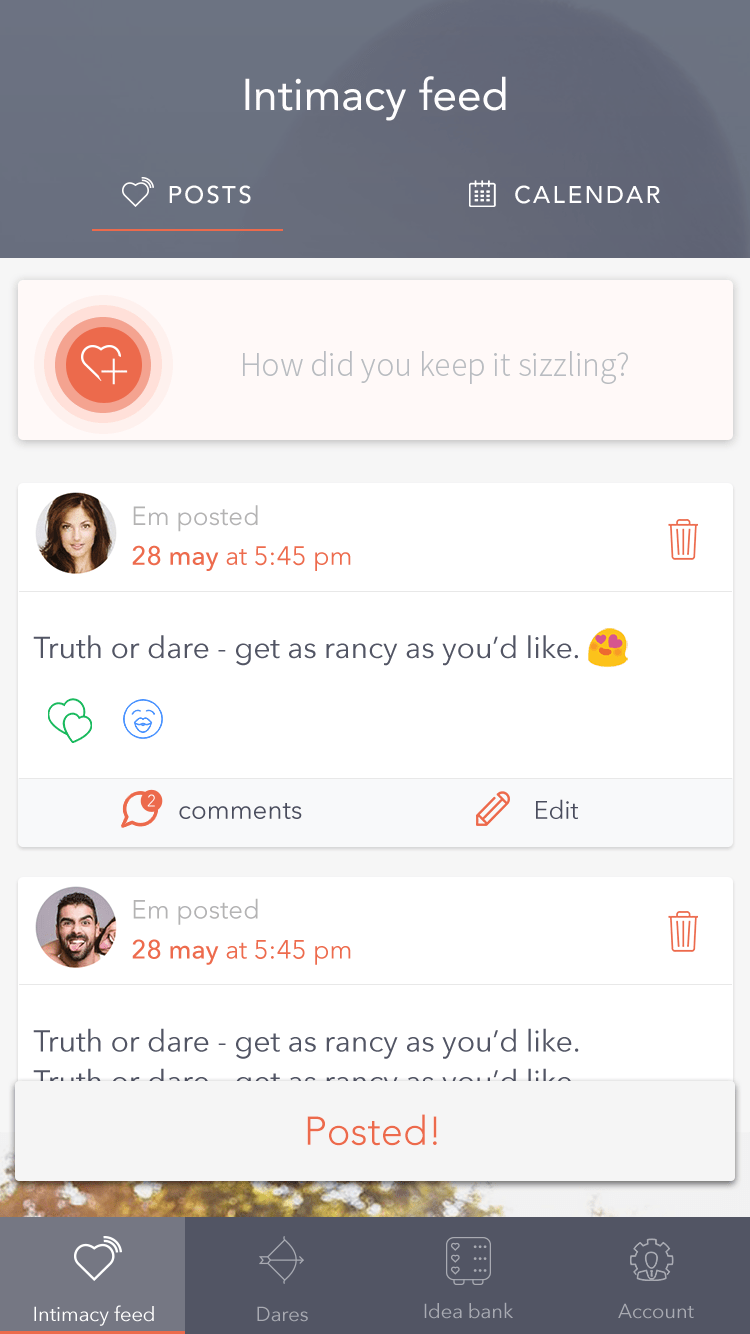 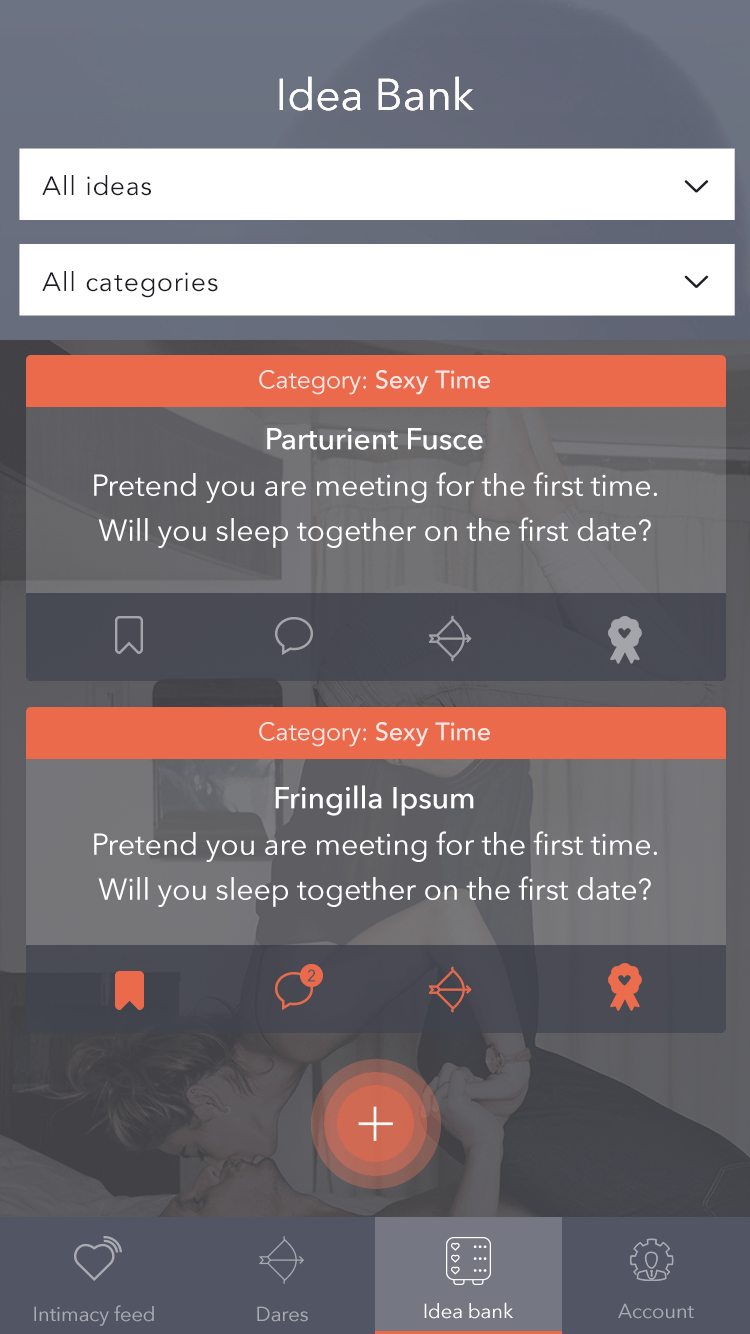 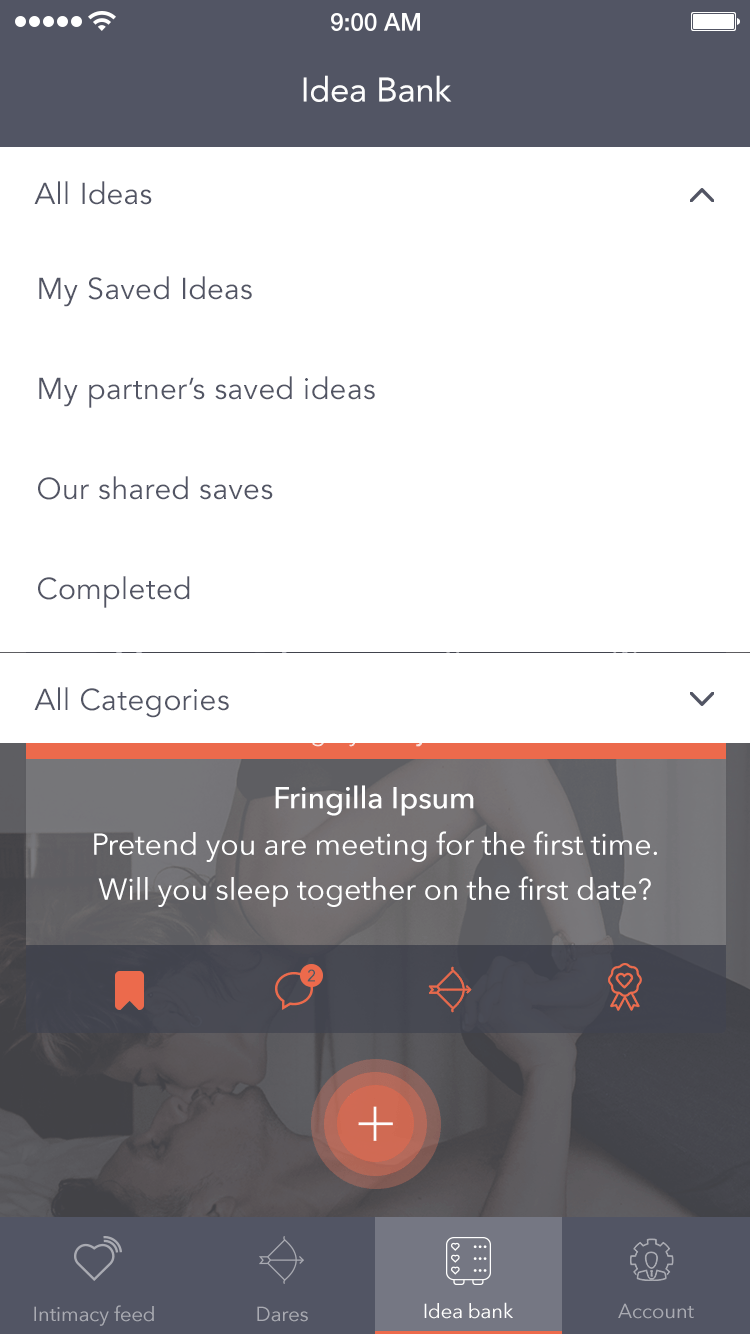 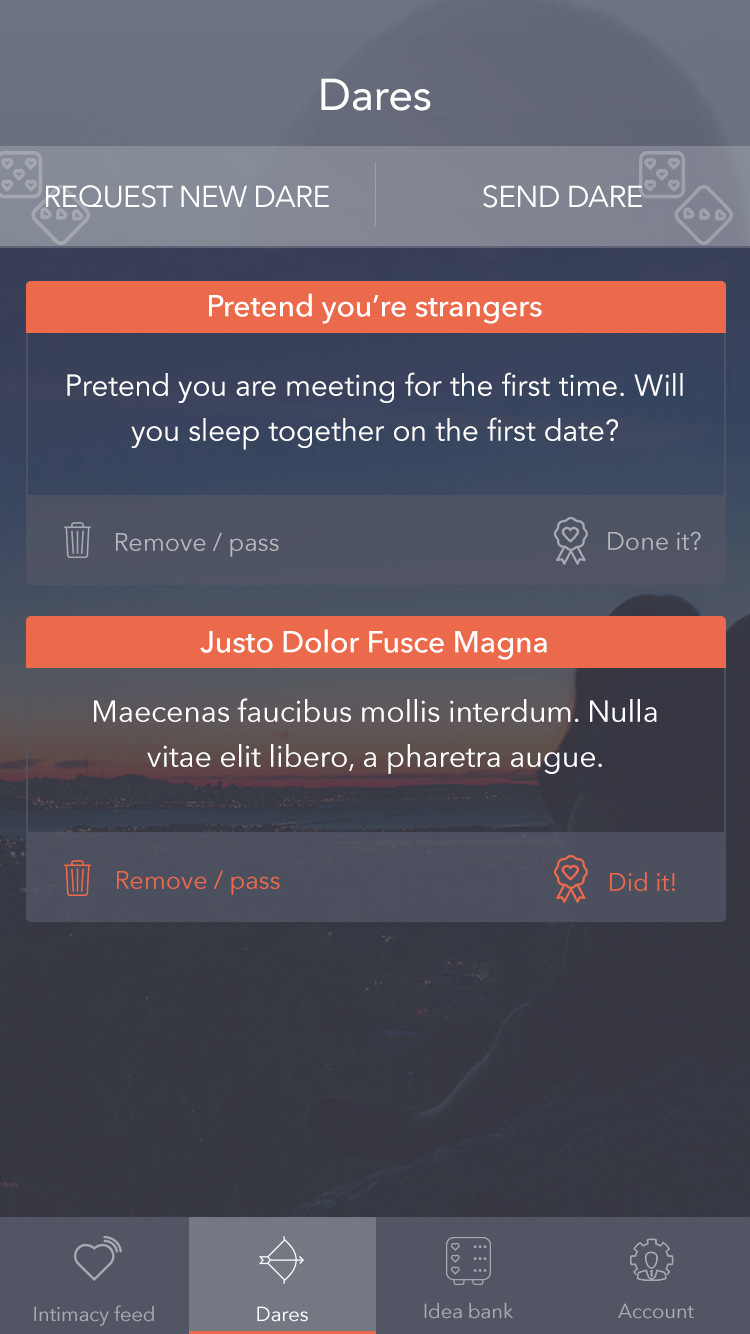 Agile as internal process. Fixed price with iteration acceptance from customer side.